THSLL Board of Directors

The District Coordinators for each district should work together as a team for the common good of the district and to relay district issues / topics to the THSLL Board. Generally the Class A Coordinator takes the lead and sets the tone.

Coaches and Administrators are responsible/accountable to the District Coordinator with regards to THSLL issues. 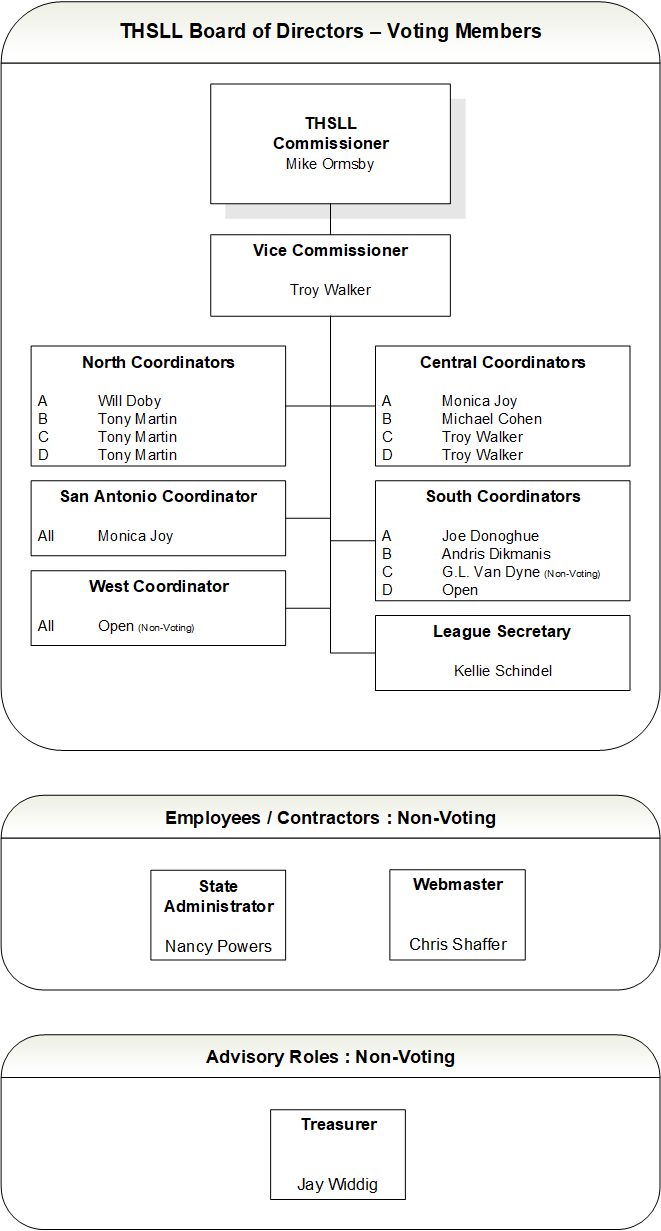 The government of the Corporation, the direction and management of its affairs, and the control of its property, shall be vested in the Board, which may exercise all such powers of the Corporation and do all such lawful acts and things as provided by statute or by the Articles of Incorporation or by these Bylaws, including, without limitation, the promulgation of League and division rules, the appointment of committees or task forces, and the delegation of such management authority to the Member Schools or otherwise.

The Board may hire paid contactors for various positions. Contractors shall receive notice of board meetings, entitled to attend meetings, and participate in discussions of the Board, but shall not be entitled to vote on any matter decided by the Board.

Board Conflict of Interest

Approved by Board of Directors at Board meeting on October 5, 2009

Texas High School Lacrosse League (THSLL) is the governing body and membership association for boys’ lacrosse teams at the high school level in Texas. The high school level is defined as grades nine through twelve. The THSLL board is comprised of volunteers throughout the state.

The District Coordinators for each district should work together as a team for the common good of the league and to relay district issues / topics to the THSLL Board. Generally the Class A Coordinator takes the lead and sets the tone / voice for the district since the goal of each Class B/C/D program is to matriculate at some point in the future.

Coaches / Administrators are responsible / accountable to the District Coordinator with regards to THSLL issues.

At no time may the number of THSLL board members who are paid and/or who are voting members of THSLL member programs make up more than 49% of the THSLL board.

If at all possible, a THSLL board member will not have a son currently playing lacrosse for a member school. If so, the board member may be asked to abstain from voting items relating to the respective district/class.